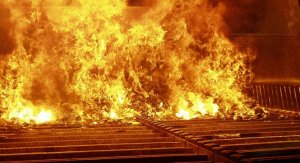 Direct combustion is the best established and most commonly used technology for converting wastes to heat. During combustion, waste is burnt in excess air to produce heat. The first stage of combustion involves the evolution of combustible vapours from wastes, which burn as flames. Steam is expanded through a conventional turbo-alternator to produce electricity. The residual material, in the form of charcoal, is burnt in a forced air supply to give more heat. The main products of efficient combustion are carbon dioxide and water vapor, however tars, smoke and alkaline ash particles are also emitted. Minimization of these emissions and accommodation of their possible effects are important concerns in the design of environmentally acceptable waste combustion systems.

Co-firing or co-combustion of biomass wastes with coal and other fossil fuels can provide a short-term, low-risk, low-cost option for producing renewable energy while simultaneously reducing the use of fossil fuels. Co-firing involves utilizing existing power generating plants that are fired with fossil fuel (generally coal), and displacing a small proportion of the fossil fuel with renewable biomass fuels. Co-firing has the major advantage of avoiding the construction of new, dedicated, waste-to-energy power plant. An existing power station is modified to accept the waste resource and utilize it to produce a minor proportion of its electricity. Co-firing may be implemented using different types and percentages of wastes in a range of combustion and gasification technologies. Most forms of biomass wastes are suitable for co-firing. These include dedicated municipal solid wastes, wood waste and agricultural residues such as straw and husk.

Gasification systems operate by heating wastes in an environment where the solid waste breaks down to form a flammable gas. The gasification of biomass takes place in a restricted supply of air or oxygen at temperatures up to 1200–1300°C. The gas produced—synthesis gas, or syngas—consists of carbon monoxide, hydrogen and methane with small amounts of higher hydrocarbons.  Syngas may be burnt to generate heat; alternatively it may be processed and then used as fuel for gas-fired engines or gas turbines to drive generators. In smaller systems, the syngas can be fired in reciprocating engines, micro-turbines, Stirling engines, or fuel cells. There are also small amounts of unwanted by-products such as char particles, tars, oils and ash, which tend to be damaging to engines, turbines or fuel cells and which must therefore first be removed or processed into additional fuel gas. This implies that gasifier operation is significantly more demanding than the operation of combustion systems.

Pyrolysis is thermal decomposition occurring in the absence of oxygen. During pyrolysis process, waste is heated either in the absence of air (i.e. indirectly), or by the partial combustion of some of the waste in a restricted air or oxygen supply. This results in the thermal decomposition of the waste to form a combination of a solid char, gas, and liquid bio-oil, which can be used as a liquid fuel or upgraded and further processed to value-added products. High temperature and longer residence time increase the waste conversion to gas and moderate temperature and short vapour residence time are optimum for producing liquids. Pyrolysis technologies are generally categorized as “fast” or “slow” according to the time taken for processing the feed into pyrolysis products. Using fast pyrolysis, bio-oil yield can be as high as 80 percent of the product on a dry fuel basis. Bio-oil can act as a liquid fuel or as a feedstock for chemical production.

BioEnergy Consult is committed to the development of sustainable energy systems based on non-food renewable resources and different types of wastes. Our primary mission is to promote Renewable Energy and Sustainable Development worldwide, particularly in developing countries. We are actively engaged in the conceptualization, promotion, implementation, development and financing of Biomass Energy, Waste-to-Energy, Sustainable Biofuels, Waste Management and Alternative Energy ventures in different parts of the world.

BioEnergy Consult promises to address many environmental issues, especially global warming and greenhouse gases emissions, and foster sustainable development among poor communities. The potential role of alternative energy systems in transforming global energy outlook, and addressing climate change concerns, is enormous. We endeavour to bring Sustainable Energy Technologies within the reach of developing countries and to create a mass awareness about the challenges posed by environmental issues like Climate Change and Global Warming.

BioEnergy Consult is an organization with a well-defined mission: To provide cost-effective sustainable solutions through environmentally-safe and well-proven Alternative Energy Systems and Waste-to-Energy Technologies to ensure better Quality of Life.

There are many ways to generate electricity from biomass using thermo-chemical pathway. These include directly-fired or conventional steam approach, co-firing, pyrolysis and gasification.

Most of the woody biomass-to-energy plants use direct-fired system or conventional steam boiler, whereby biomass feedstock is directly burned to produce steam leading to generation of electricity. In a direct-fired system, biomass is fed from the bottom of the boiler and air is supplied at the base. Hot combustion gases are passed through a heat exchanger in which water is boiled to create steam.

Biomass is dried, sized into smaller pieces and then pelletized or briquetted before firing. Pelletization is a process of reducing the bulk volume of biomass feedstock by mechanical means to improve handling and combustion characteristics of biomass. Wood pellets are normally produced from dry industrial wood waste, as e.g. shavings, sawdust and sander dust. Pelletization results in:

The processed biomass is added to a furnace or a boiler to generate heat which is then run through a turbine which drives an electrical generator. The heat generated by the exothermic process of combustion to power the generator can also be used to regulate temperature of the plant and other buildings, making the whole process much more efficient. Cogeneration of heat and electricity provides an economical option, particularly at sawmills or other sites where a source of biomass waste is already available. For example, wood waste is used to produce both electricity and steam at paper mills.

Co-firing is the simplest way to use biomass with energy systems based on fossil fuels. Small portions (upto 15%) of woody and herbaceous biomass such as poplar, willow and switch grass can be used as fuel in an existing coal power plant. Like coal, biomass is placed into the boilers and burned in such systems. The only cost associated with upgrading the system is incurred in buying a boiler capable of burning both the fuels, which is a more cost-effective than building a new plant.

The environmental benefits of adding biomass to coal includes decrease in nitrogen and sulphur oxides which are responsible for causing smog, acid rain and ozone pollution. In addition, relatively lower amount of carbon dioxide is released into the atmospheres. Co-firing provides a good platform for transition to more viable and sustainable renewable energy practices.

Pyrolysis offers a flexible and attractive way of converting solid biomass into an easily stored and transportable fuel, which can be successfully used for the production of heat, power and chemicals. In pyrolysis, biomass is subjected to high temperatures in the absence of oxygen resulting in the production of pyrolysis oil (or bio-oil), char or syngas which can then be used to generate electricity. The process transforms the biomass into high quality fuel without creating ash or energy directly.

Wood residues, forest residues and bagasse are important short term feed materials for pyrolysis being aplenty, low-cost and good energy source. Straw and agro residues are important in the longer term; however straw has high ash content which might cause problems in pyrolysis. Sewage sludge is a significant resource that requires new disposal methods and can be pyrolysed to give liquids.

Pyrolysis oil can offer major advantages over solid biomass and gasification due to the ease of handling, storage and combustion in an existing power station when special start-up procedures are not necessary.

Gasification processes convert biomass into combustible gases that ideally contain all the energy originally present in the biomass. In practice, conversion efficiencies ranging from 60% to 90% are achieved. Gasification processes can be either direct (using air or oxygen to generate heat through exothermic reactions) or indirect (transferring heat to the reactor from the outside). The gas can be burned to produce industrial or residential heat, to run engines for mechanical or electrical power, or to make synthetic fuels.

Biomass gasifiers are of two kinds – updraft and downdraft. In an updraft unit, biomass is fed in the top of the reactor and air is injected into the bottom of the fuel bed. The efficiency of updraft gasifiers ranges from 80 to 90 per cent on account of efficient counter-current heat exchange between the rising gases and descending solids. However, the tars produced by updraft gasifiers imply that the gas must be cooled before it can be used in internal combustion engines. Thus, in practical operation, updraft units are used for direct heat applications while downdraft ones are employed for operating internal combustion engines.